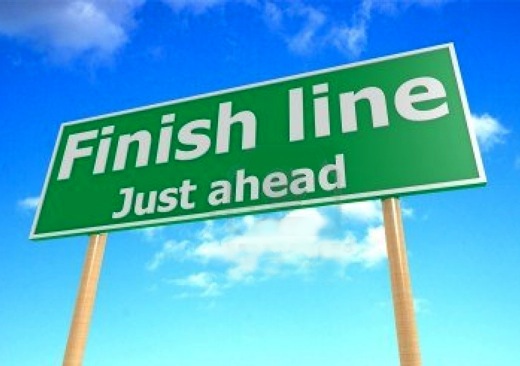 I have run several marathons and many more half marathons over the past twenty years. Inevitably there are well-intentioned bystanders within the last quarter of the distance shouting words of encouragement, including “you’re almost there!” Unless those words come at mile 26 in a marathon, no, I am not “almost there.” Much agony, sweat, and pain remain.

Writing a novel is a similar process. When that rough first draft is completed some (particularly non-authors) may encourage you by saying that you’re almost finished. Nope – not even close. Reaching your desired word count and into your third revision – that’s a time to start thinking about the finish line.

At almost exactly this time last year I began my third novel, Leaving Darkness, about a man’s journey out of depression. I tried a different method that I described as Divide and Conquer. When I wrote this post in March of 2017, I had reached 3500 preliminary words towards my goal of 80,000 using this tactic. This is the update I promised then.

Today Leaving Darkness is substantially complete. At about 79,500 words, I have about reached my goal, and will likely exceed it as the editing and fine-tuning processes continue. Thus, I have essentially written a novel in a year. Considering writing is not my full-time job and I took three months off from all writing to start a consulting business, that’s not bad.

Therefore, my update on Divide and Conquer simply is this: it works. I was able to structure my thoughts logically, added details and plot elements at a measured pace, and never lost my way in the process. Leaving Darkness is by far the best of my three novels. The writing approach contrasts markedly with that of Temptations of the Innocent, written by “stream of consciousness.” That end product also contrasts with Leaving Darkness and was not one of my favorite works, but we learn from mistakes.

After I cross the manuscript finish line, now in sight and about 0.2 miles away, the next step will be to publish the novel. I’m exploring different venues there as well – stay tuned!